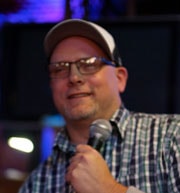 Mike Lucas is an Iowa born comic with an inviting brand of humor. His friendly approach to comedy endears him to crowds around the Midwest. It also allows him to get away with saying the outlandish things he says.